So – that’s it then. Brexit. The UK will be leaving the European Union at some point in the next 2 to 3 years. New treaties and trade deals will be struck; a new leader will be elected for the Conservative Party and, (by the looks of things), Jeremy Corbyn will be ousted from his role as leader of the Labour Party. At the moment, things look bleak. The pound has lost ground against the Euro and the Dollar. The FTSE 100 has fallen by 5%. There are dire warnings about the implications of the decision to leave on jobs, economic growth, pensions, the NHS, higher education, and national security. On the plus side, from the Brexiteers’ perspective, the UK has regained control of the country, and can now move to sort out immigration.

At least, that’s the narrative that ran throughout the campaign. ‘Project Fear’ pointed to economic disaster if Brexit succeeded. Vote Leave raised the spectre of unlimited immigration and even more European interference in UK affairs if the vote was to remain.

In reality, it’s unlikely that either of these domesday scenarios has any real basis in fact. There will be a short-term shock to the economy, but the Bank of England and most responsible financial institutions had already made provision for that. There will be an impact on research and development, and capital investment decisions in the private sector; and whoever is Chancellor of the Exchequer by this time next week will probably need to increase public capital expenditure to take up that slack. The rate of immigration to the UK will decline as some non-UK citizens decide that they no longer want to stay; and others decide against coming here in the first place. There will be skills shortages and higher job vacancy rates as a result. Unemployment (already at or around near historically low rates) will not be effected to any great degree. And immigration will return to something near current levels as the reality dawns that in fact we need people to do the work that generates the revenues that the country depends on.

The rash promises of the Leave campaign (£350m a week saved; remove VAT on domestic fuel; maintain farm subsidies at current levels; reduce immigration below 100,000 a year; and so on) will be slowly diluted or abandoned altogether. By enlarge, it’s very likely that in a couple of years, things will be pretty much the same as they are now.

The problem, of course, is that because things will be the same, the anger, the sense of powerlessness, the disillusionment with the political class, the belief shared by at least 51% of the voting public that they are not being served by the current system, will remain. And the big question then will be : so what happens next?

That’s the challenge for post-Brexit politics. How can whatever emerges from the train-wrecks that are the current Conservative and Labour parties re-engage with people in a way that makes the political process real and meaningful again. It won’t be easy.

“Saying is one thing and doing is another”. A quote from de Montaigne. The father of the Enlightenment and a resident of Bordeaux. I don’t know how much de Montaigne Chris Coleman has read (I don’t think it’s on the UEFA ‘A’ License curriculum), but his team executed the ‘doing’ in simply wonderful fashion.

There are defining moments in modern history : the declaration of war in 1939; the moon landings; the shooting of John F. Kennedy; the attack on the Twin Towers. People remember where they were at the exact moment that these things happened. To that list must now be added the moment when Hal Robson Kanu beautifully, exquisitely, agonisingly, scuffed a left footed shot into the corner of the Slovakian net 84 minutes into Wales’ opening game in the European Championships in France, 2016.

Hal Robson Kanu : as Welsh as a zebra, but he’ll f*****g do. My new favourite football song ever.

I can’t do justice here to the events of a day that started in a restaurant in the main square in Bordeaux with the kind of burger and chips that only happens in France (“How would you like the burger cooked, sir?”); and ended at 3am on Sunday morning outside a bar in the same square, singing with Slovakian fans as the local police stood, watched, smoked, and eventually went home bored.

In between, there was the journey to the stadium on the outskirts of Bordeaux in a bus designed for 60 but easily accommodating 200 Welsh fans and a French family on their way home who started off a little concerned, but ended up singing “Watch out Europe, the Welsh boys are back” by the time their stop came around. I still don’t think they quite knew what to make of the 18 stone Valleys lad who plucked their anxious six year old up into his arms and clear of the crush so that the boy was safe and out of harm’s way. But it was that sort of day.

The Slovakian anthem was observed with impeccable silence and polite applause. And then Mae hen wlad fy nhadau rang out around the stadium with an intensity, volume and passion that must have been heard in Paris. When Ben Davies cleared a goal-bound shot off the Welsh line in the opening 5 minutes, we began to think that maybe, just maybe, this was going to be our day. And then Gareth Bale did what only Gareth Bale can. We were stood right behind that free kick at the other end of the ground. I swear that new laws of physics were written as the flight of the ball changed direction three times in the 25 metres that it flew from foot to net.

The Slovakian equaliser after half time was inevitable. We are Wales, for gods’ sake – this was never going to be easy. And then came the moment. Robson Kanu introduced to the fray to replace the excellent Johnny Williams. Hal Robson, Hal Robson Kanu. The chant went up. We knew. Hal knew. 84 minutes. Ramsay rocks and rolls to the edge of the Slovakian area – never quite in control of himself or the ball. Toe ends it past the despairing challenge of Skrtel (good with his elbows – not so good with his feet here). Time stands still. There is a moment of stillness. Peace. And then Hal. Not the best strike ever. A scuff really. And the ball rolling in slow motion over the goal line and nestling gently in the back of the net. Pandemonium in the stadium. 30,000 Welsh fans looking at each other in disbelief – can this really be happening? Grown men in tears, hugging the bloke next to them. Cheering, singing, and – in at least one case – dislocating a shoulder in the sheer joy of the moment (it’s ok – it popped back in and no analgesia was required!).

Back in the fan zone later in the evening, watching Russia v England on the big screen. Drink in hand. England winning one nil and into the final minute of added time at the end of the ninety. The equaliser. At least five thousand Welsh fans devastated for our English neighbours…

If Carlsberg did Saturdays… 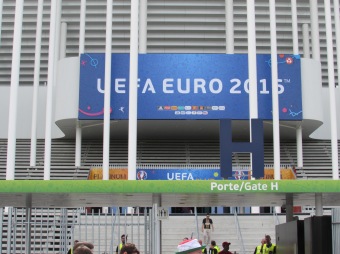 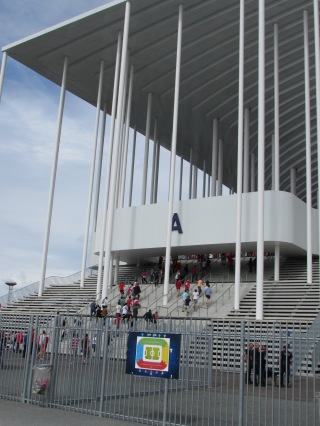 So – it’s finally arrived. That moment that I thought I would never see in my lifetime. Wales playing in a major football tournament. A real one. Not the Home Internationals. Not even the Nations Cup (remember that one?!). This is the real thing. The European Championships, for heavens’ sake. And to make things even better, it’s in France. The best place in the world to host a major sports event. The most beautiful people, cuisine to die for, wine which is the very nectar of the gods – and you can drive there from Wales!

Oh! And Dan and me have got tickets for Wales’ opening game against Slovakia on Saturday night.

So it was that we set out from Cardiff at 7.30pm on Thursday to catch the midnight ferry from Portsmouth to Caen. Brittany Ferries MV Normandie had the honour of delivering more Welshmen to the French coast in a single crossing than at any time in the last 72 years! You knew that something special was happening when the strains of Calon Lan were intermingled with that bloody awful “Football’s coming home” (I refuse to include a link – you’ll have to search for it yourself!) as we waited to board the ferry. Yes – there were one or two English supporters making the same crossing on their way to Marseille for their opener against Russia.

One of the things that being a Welsh football supporter teaches you is resilience. Resilience in the face of decades of near misses and crushing disappointment (Joe Jordan’s ‘hand of god’ moment, anybody?). But that resilience also converts in limitless optimism. This was exemplified in Portsmouth by the 30 year old VW Camper Van packed with six burly, north Walian football supporters, five of whom were already well on their way to alcohol-fuelled unconsciousness by the time we rolled onto the ferry. I genuinely hope for their sakes that that van was only for transport purposes. I dread to think what it would be like if they were planning to sleep in it too!

Arriving in Caen on a cloudy Friday morning, we set out on the 500km drive to the south west of France and Bordeaux. It took a long time on very straight roads and we didn’t see anything very interesting on the way. That’s all that needs to be said about that.

Having checked-in to our hotel, we set off for a walk along the river bank in the general direction of Bordeaux’s European Championships Fan Zone. Stopping off for some food on the way, we arrived at the fan zone in plenty of time for the local pre-match warm up entertainment on a stage in front of the biggest, sharpest giant television screen that I have ever seen.

In truth, the opening match between France and Romania wasn’t a classic. It did however, provide further evidence of the truth that football is like modern jazz. Long periods of formless cacophany punctuated by moments of the most exquisite harmony. Last night, the harmony was provided by Dimitri Payet with a goal worthy of winning the Championship, never mind the opening group game. To say that the French fans in Bordeaux were pleased would be a severe understatement!

I hope that we Wales fans get to savour a similar moment against Slovakia later today. 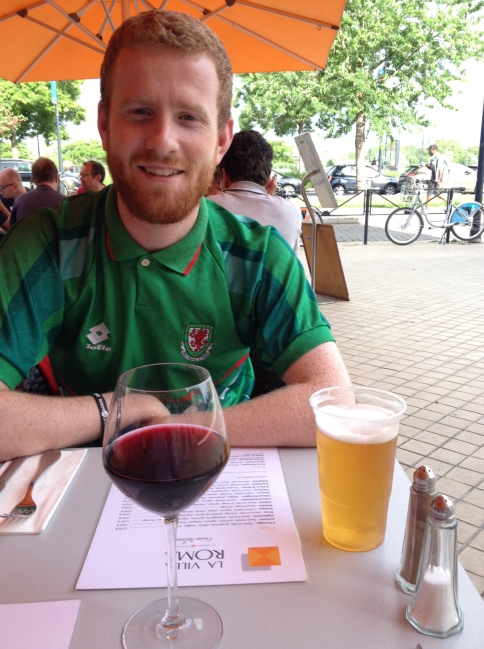