Our family holiday to New York and Florida over Easter coincided with Orlando City’s early season encounter with LA Galaxy at the home team’s recently opened, purpose-built ‘soccer’ stadium in downtown Orlando. Tickets having been secured before we left the UK, we travelled into Orlando from our base in Polk County in plenty of time for the 2.30pm kick off that the club’s e-mail had confirmed earlier in the morning. The Orlando City mascot is a lion and the stadium is seeking to brand itself as The Lion’s Den (prompting all kinds of comparisons with the sort of bear pit atmosphere generated by fans of Millwall FC in London). Unfortunately, the comparisons lose some of their intensity when you add the name of the sponsor to the title – “The Walt Disney World Lion’s Den” somehow lacks the fear-inducing punch of the Bermondsey version. 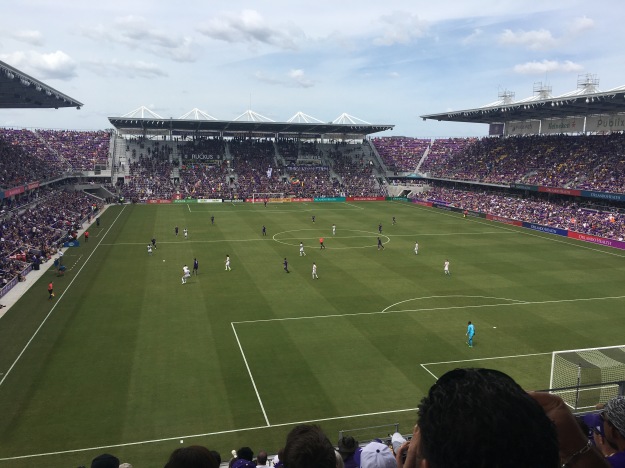 The problem with football as a summer sport in a place like Orlando is that it’s very warm during the day. Even at this stage in late April, the temperature was in the mid 80s at kick off. This makes it great for the spectator, but a nightmare for the players. Copious amounts of water were sprayed onto the playing surface in the run-up to kick off and at half time, at least in part to cool the pitch-level atmosphere. The mid-afternoon kick off was (I suspect) to meet the demands of live television coverage, but it’s surely something that MLS needs to take into account in scheduling games as the season progresses and temperatures rise.

Perhaps partly as a result of the conditions, this game was played out in three distinct phases : an opening 15 minutes that saw Orlando hit the post, score, and then hit the same post a second time; a middle 60 minutes of huff and puff, limited quality, and gentle pace; and a final 15 minutes in which Galaxy created a series of excellent chances, equalised, and then contrived to concede a 91st minute goal scored by Orlando’s Larin – his only meaningful contribution throughout the entire game. That effectively summarises the key events. So time for some more general observations.

The overall quality of football on display today was not brilliant. At times, some of the defending bordered on the comical. That said, certain players stood out. Orlando’s Nocerino bossed the centre of midfield like an infantry general – barking orders and marshalling his team-mates with the kind of no-nonsense intensity that commands obedience. His reading of the game allowed him to get into positions to disrupt Galaxy attacks time and time again, and it was perhaps no surprise that the west coast team’s best moments came as he tired as the clock ran down. For Galaxy, their stand-out performer was Alessandrini, effectively playing in the modern no. 10 role. His close control and vision was – unfortunately for Los Angeles – so far in advance of his team-mates that they were often unable to anticipate his ability to get out of tight situations and open up the play. It was no surprise that Galaxy’s equaliser came from Alessandrini (a sweetly struck right foot effort from 20 yards). What was surprising was the much easier chance on his preferred left foot that he squandered moments before.

‘Soccer’ is still evidently a minority sport in the US. Whilst the club claimed a sell-out for this match, it was clear that many (presumably) season-ticket holders had not made it to the ground on this Easter Saturday. There were lots of empty purple seats in the two stands on either side of the pitch, and the terrace behind the goal opposite our seats was only about 80% full. The fact that there was a dedicated standing area does at least demonstrate Orlando’s commitment to creating the sort of atmosphere that makes football a compelling live event. Flags are encouraged in this part of the ground (and there was a proud Y Ddraig Goch on display for the Galaxy game), and huge plumes of purple smoke were released as the teams entered the stadium and when Orlando scored. The problem, though, is that there were almost no away supporters at all (unsurprising given the geography of a continental competition). When Galaxy equalised in the 80th minute, we only saw one LA fan rise to his feet to cheer (and I think even he was a holidaymaker rather than somebody who’d made the trip specifically for the game). As a result, the game was played out in a sterile environment with none of the banter between supporters that provides the humour and edge (and sometimes, yes, the menace) of the European football experience. That certainly contributes to the ‘family friendly’ feel of the event, but for me at least, it was all a bit anodyne – a kind of ‘if Disney did football’ theme park experience. I’m not saying that that is necessarily a bad thing – it is just different.

The LA Galaxy fan – we didn’t see another one…

So – overall : a good day out in the sun at a well-designed stadium watching too pretty equally matched teams struggling to overcome the heat and humidity but doing enough at either end of the game to send us home feeling that the trip was worthwhile. 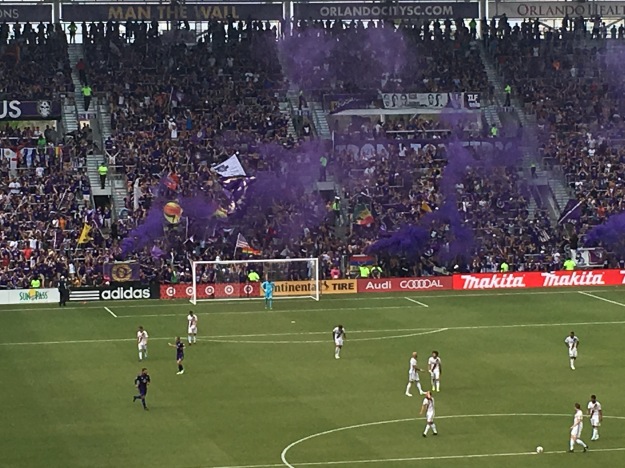 No pyro, no party

(Thanks to Dan for the match day photos)